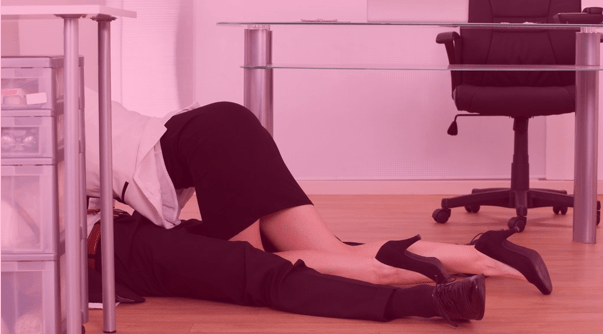 When you’re single, anywhere you go, you can’t help but feel your eyes wander across the room to weigh up the prospects around you. You know what I mean. When you’re on a night out, sure you’re drinking and dancing but you’re always open to the blokes about the place and subconsciously sussing out their suitability. Oh and it’s not just night outs either, it’s everyday situations.

Let’s face it, we all live for the fantasy of bumping into Mr Right in a normal place at a normal time and living happily ever after. Where do a lot of us crave this happening? At work.

Surprising? Perhaps. In fact, a recent survey from henheaven.co.uk found that 61% of us have actually hooked up with someone in the office. As Jeremy Kyle would say, that could be anything from a kiss to intercourse. When you’re working, you’re seeing this person (or these people) nearly every day and even enjoying social activities outside the 9-5, so it’s no wonder we end up getting a little more up close and personal. Oh and it can definitely get more serious than a one night stand too. 43% of us have actually dated someone in the office. Granted, that’s only slightly less than half but it’s still more than you’d probably think right?

Of course it is. The old saying goes that “you shouldn’t mix business with pleasure” but does that traditionally conventional wisdom still apply today? I couldn’t help but wonder…

Should you ever dip your nib in the office ink?

It’s a tough one. Just because you work together, surely this shouldn’t stop you from pursuing a romantic attraction? I know people say that there are plenty more fish in the sea, but sometimes you feel that the pool is getting smaller so when you do finally come across someone who ticks more than a few boxes, should you disregard trying to make something of it just because it might be frowned upon?

Well no but you definitely need to make sure that it’s worth it. A silly, drunken one night stand at the Christmas party could quickly be forgotten about and have very little impact, but an on-going relationship with a close co-worker? Not so much. If you’re truly serious about a relationship like this with a colleague, make sure you’ve thought about what will happen if it goes well, but more importantly, what the repercussions might be if things take a turn for the worst.

Anyway, if you do happen to fall into bed with someone, try not to make it a regular thing. If you find yourself getting into a pattern of meeting people in a romantic capacity at the office, you might find yourself getting a bit of a reputation and do you really want to risk your professional image for the sake of a few dangerous liaisons? Probably not.

What not to do is to let them know by sticking your tongues down each other’s throats in the breakroom. No one can stomach PDA at the best of times, especially not in the office, so try to keep your paws off each other until closing time.

Oh and if you can help it, try NOT to date the man at the top. No one wants the label of being the boss’s bit on the side. This is the point at which things would get much more complicated, people would automatically assume that you’re trying to climb the ladder by, well, climbing the boss like a tree. Not to mention that if you get any sort of recognition for your work, colleagues wouldn’t put this down to you being good at your job, they’d think it’d be down to you being good at a different kind of “job” if you get my drift.

I guess when it comes to dating at work, honesty is the best policy.

If you find yourself involved with someone you feel serious about, be sure to let people know and remain professional, and always consider the consequences, whether they be good or bad because failing to do so could leave you without a job as well as a man.

Oh and if you do end up accidentally having that one night stand after the Christmas party, don’t worry honey, we’ve all been there.