I love the weekends. A time for rest, relaxation and recuperation. On this particular weekend, I found myself in a euphoric state of laziness. An incredibly busy week at work had left me craving a day of doing absolutely nothing and I was tremendously excited about it. Not having to wake up to an alarm, not having to dress, or even get washed for that matter. Just lying around the apartment, watching films and completely switching myself to the real world, and of course, my version of escapism was always accompanied with a take away meal and 1 or 3 bottles of wine. This was going to be a good Saturday.

I dragged myself from my bed to the couch, taking with me a duvet and a selection of films to watch at my leisure. I could not be more content. Who ever said that being single was a bad thing? At this point, I wasn’t in love, but I was in my own company, and in absolute bliss. I wrapped my blankets around me, much like a human burrito, and proceeded to press play for the first movie in my marathon, when I caught sight of my phone lighting up in my peripherals.

Who had the audacity to interrupt my non-productivity? I had no plans to even wash today, never mind communicate. I reluctantly swiped my phone from the table to see who it was. It was Matthew.

My feelings of elation rapidly changed to a deep, sickly, nervous sensation – why was Matthew texting me? We’d broken up a couple of months before, completely amicably but nevertheless, it was still difficult to move on. Hesitantly, I opened the message: “I miss you Naomi x” 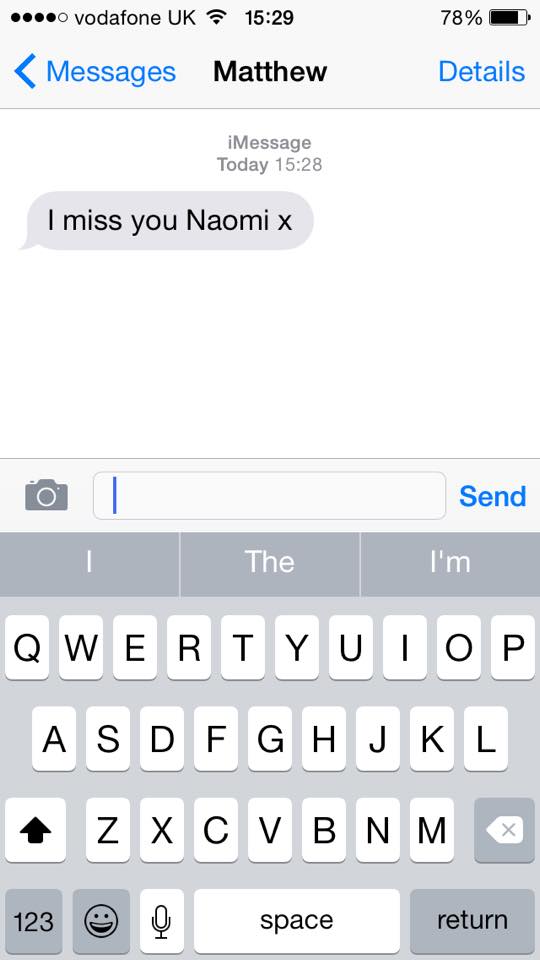 You miss me? What does that even mean? We broke up 2 months ago, we were looking for different things, I’m trying to move on and you drop that bomb on me? My clear and trouble-free mind was now plagued with a whirlwind of emotions leaving me feeling confused and unsettled. In a perfect world, where we women aren’t such emotional creatures, I would have simply taken the fact that Matthew missed me as a welcome ego boost that his life just wasn’t as good without me in it. However, this is the real world. I had spent weeks trying to cut Matthew out of my life and mind and just like that, my thoughts were encompassed with the things we had done, the things he had said and the times we had spent together. Great – I was back to square one.

I didn’t reply straight away, in fact, after a seemingly visible tussle with my conscience, I didn’t reply at all. I had been making good progress. Songs that used to remind me of Matthew had become white noise, places that used to remind me of Matthew had become meaningless locations and emotions that I used to feel for Matthew had become overwhelmingly obsolete. No way was I going risk throwing away all my hard work. It’d be like going to the gym then coming home and eating a McDonalds and half your body weight in Dairy Milk. No, a response certainly wasn’t something Matthew was going to get.

At first glance, I felt warm to the fact that he missed me then I gave myself a cold, hard reality check. He doesn’t miss me, he’s just bored and I think we’re all guilty of acting (or having acted) this way in the past. When you’re single, it’s a truth universally acknowledged that you go through periods of time where you feel pretty damn lonely – and that’s okay. We’re human and we naturally crave the love and attention of another, and when we don’t have it, it’s no secret that we can be left feeling alone albeit slightly unwanted and sad.

What’s not okay is not handling these feelings properly. Believe me, I’ve been there and guess what? It passes. It’s a temporary glitch in our emotional make-up and once it’s gone, you’re back to feeling like that strong, independent woman (or man) again. Matthew, in this instance, has obviously been unable to deal with this instance of loneliness and has turned to past lovers for comfort and assurance that a) he’s not alone and b) he’s still wanted.

I chose not to give him the satisfaction, or take the bait and respond. It’s a big, bad world out there and sometimes, you just have to be cruel to be kind, to others and to yourself.