There I was. Saturday morning – 9am. Perched on the end of my bed wearing nothing but a towel, and shivering as I felt the cold water from my wet hair drip down my back as tears rolled down my cheeks onto the phone I was holding.

It all started just under a year ago. As many of you know, I moved to Glasgow last year so no longer a Manchester girl, but still a place I hold dear in my heart. Whilst in Manchester, I met a guy called John. I thought nothing of him at the time. We’d ended up meeting through mutual friends in our mutual home town on mutual ground – the local. Of course, after having enjoyed each others company on more than one occasion, we decided to keep in touch through the usual mediums – WhatsApp, Facebook – the works.

John wasn’t someone I’d look at and think ‘wow’ but there was definitely something about him that caught my interest, and I guess that explained why we kept in touch. Sure, he was no fantasy but he made me laugh, and we got on: something that sometimes seems so rare. I wasn’t going to throw away a good relationship – romantic or not – on the grounds of aesthetics. No, I’m not that shallow.

After a few months had passed, John and I were still chatting away, every day, not all day every day, but every day. The time came where I was to make a career move and up sticks from Manchester and move to the other side of the border, which was fine, as John didn’t see that as a reason for us to stop talking or showing a genuine interest in potentially pursuing something more than simple instant messages. I won’t lie, at this point, I kind of liked this idea.

I mean, we’d been talking for months. We literally knew so much about each other, and not just the standard, age sex location (remember those days guys?) No, I mean, really intimate details, like what makes us tick, what makes us sad, or more importantly, what makes us happy. This was no longer just friendly banter between two casual acquaintances, for want of a better word, shit was starting to get serious. This was actually going somewhere, I could see it happening. I tried not to get too excited to avoid disappointment but waking up to an endearing text from John in every single morning made that increasingly difficult.

The thing was, we’d never REALLY spent all that much time together. Don’t get me wrong, there’d been several occasions we’d got along in a social setting but just me and him? Never. Was I mad to think that something could develop when we’d never really been, well, just me and him? I don’t think so. Hell, we live in a bloody digital world these days, it’s not inconceivable. So I kept going, I kept chatting, and I kept getting butterflies every time his name were to pop up on the screen of my phone.

However, natural progression generally suggests that online communication simply isn’t the be all and end all: a statement of which I agree with entirely. The time had come for John and I to arrange to meet. Not in our local, not on mutual ground, not between friends. Just John and me. It was so exciting. All those Disney songs start playing in your head as you begin to think “surely this is too good to be true?” I mean, guys aren’t complicated, if they want you, it’s pretty obvious, likewise if they don’t. John was always the first to text me, or to pick up the phone, or to tell me I looked pretty in a photo, or.. well.. you get my drift. I felt perfectly comfortable dropping my guard as I knew, for once, that these feelings were reciprocated.

The date was set. John planned to come to Glasgow to spend the weekend with me. Not the night, the weekend. An entire weekend just me and him. We spent ages on the phone chatting about the things we’d do and how we were both really looking forward to it. I won’t lie, the week before dragged in a blinder. I was literally clock watching from the minute Monday began. In typical female fashion, I couldn’t help but get stressed at regular intervals mulling over the best time to shave my legs, and the knickers I should wear, and whether I should stash my Disney DVD collection behind the sofa. Granted, things that would all seem pretty irrelevant once he’d arrive. Friday at 6pm. That was what we’d planned.

I rushed home from work, a little earlier than usual, to make sure I was ready. I’d made a conscious effort midweek to ensure that my flatmate had made alternative arrangements for the weekend ie. made herself completely scarce so as not to disturb and/or embarrass us in any way, and when I arrived home that Friday, I found her to be gone already. I quickly redid my make up – this was no time for a daytime foundation – and made sure I looked more than just ‘presentable’ for the moment John arrived. I was nervous, excited, not at all anxious, I just couldn’t wait. I heard his car pull up outside, and smiled.

I’ll be honest, he seemed a lot more handsome than I actually remembered, but maybe that had a lot to do with the fact that he wasn’t just ‘some guy’ to me anymore, I knew him, I knew everything about him, so he had more meaning to me. Either way, I was happy that I looked at him and really wanted him. The first night – as planned – would be a night in. Drinks, food, chat, sex – yes, sex, we’re all adults here – and just making the most of the long weekend together. It was so good, such fun, such a laugh, such surprisingly good sex, and such a nice way to go to sleep, in the arms of the man you’re falling for.

We awoke the next day and with a day out (and a night out) planned, there was no time to waste. Of course, we indulged in a little morning glory before we got that ball rolling. Shortly after, John gave me a polite nudge in the right direction by jumping in the shower first. On the way to the bathroom, he’d grabbed his bag and left it by the door, which I assumed was full of, well you know, man toiletries, whatever they are. I just lay in bed, wide awake and looking up at the ceiling, completely content with how the weekend was panning out so far but more importantly, happy with how our relationship was developing.

John came back into the room wrapped in a towel which I believed to be my cue to get my arse into gear and hop into the shower myself, which I did. As I was running my fingers through my hair under the water and singing away to Elvis’ Greatest Hits, I heard a bit of a bang, but I just guessed that John was pottering about the kitchen looking for a mug, because let’s face it, routing through someone elses cupboards trying to find what you want is a chore in itself. I stepped out of the shower, grabbed a towel and headed back into the bedroom. John wasn’t there. I popped my head round the door, his bag was gone too. I went into the kitchen, the living room, even my flatmate’s bedroom. He was nowhere to be seen. I sat on the end of my bed for a second and heard my phone vibrate. So I looked over and my heart. Well, it just sank. 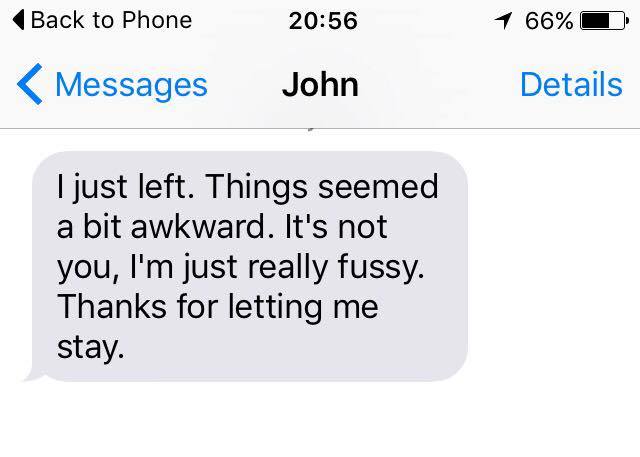 There I was. Saturday morning – 9am. Perched on the end of my bed wearing nothing but a towel, and shivering as I felt the cold water from my wet hair drip down my back as tears rolled down my cheeks onto the phone I was holding. I felt used, I felt tormented, I felt self-conscious, I felt ashamed, I felt deceived… the list was endless. The f*cking coward didn’t even have the common, human decency to say anything to my face, he left WHILE I WAS IN THE SHOWER.We had been talking and getting to know each other for months, then one night together and BANG! Gone. I felt like a bloody idiot. Weeks upon weeks of time and emotions invested into one person and for what? A now one-night-stand and not even a goodbye?

I’ll never really know what happened as I never heard from John again but I’ll tell you something, he did me favour, thank God I wasn’t left lumbered with that waste of perfectly good oxygen. Hell, it’s all a learning curve and I guess you’ve got to expect the unexpected although maybe not quite in that context, but you know what, I was not defeated by this bad man and his cowardly ways. No, I’d showered, so I took it upon myself to get ready and go grab my girls, and we drank cocktails. All day, all night… and we laughed, so much, and the ladies reminded me of something that mattered more than a man who thought he’d got the better of me… my worth.