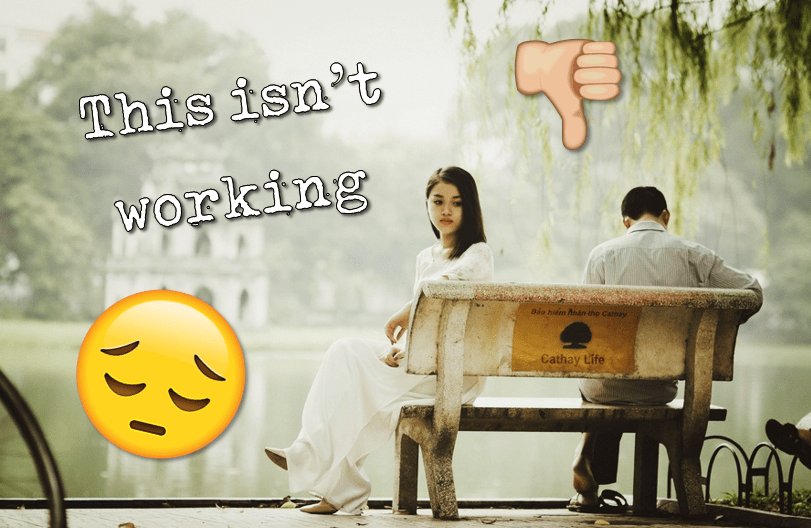 Relationships are all about love, and compromise, and understanding, and empathy.. and well, the list goes on, but that much is clear. Over time, I’ve seen relationships blossom into marriages, but naturally with the good comes the bad, so I’ve seen them break down too. Of course, the following conversations include such phrases as “why me?” and “what did I do wrong?” and “I thought that would be it for us”. I could go on all day. However, I guess what’s important to remember that the majority of the time, it’s not you that’s wrong, it’s the relationship.

We’re human and that’s the long and short of it. I’m not going to sugarcoat it because, well, I simply won’t, but shit happens. We made good choices, we made bad choices, and it really does shape who we become. We’ve all got a happy ending to find somewhere down the line but it’s a truth universally acknowledged that in the interim, you will inevitably invest your time with the wrong person in the wrong relationship, for whatever reason that might be.

But how do you know if you’re in the wrong relationship?

Okay, I know this seems like a pretty obvious one but hear me out. Compatibility and compromise are crucial to a happy, healthy relationships and these things obviously come much easier when you’re singing from the same hymn sheet, so to speak. You like nights out, he likes nights in, you want to travel, he’s never been away, you’re overwhelmingly generous, he’s tight as shite . You get what I’m saying? Already I know you’re thinking “this won’t work” and you’re right. Fundamental differences create monumental catastrophe, and there’s only so much bending you can do in a relationship before you snap.

You Feel Bad About Yourself

It doesn’t take a genius to realise that a good relationship should make you feel, well, good! Naturally, we women are all slightly psychopathic at times when it comes to our insecurities (please don’t deny this, you know it’s true ladies, we’re all overthinkers), however this shouldn’t give anyone the opportunity to undermine you, or patronise you, or play on your self-esteem. A significant other is there to enrich your life and make you feel special, and if they don’t, and you end up feeling worse… Do I really need to tell you what to do?

You’re No Longer Excited By Them

Think back to those first few weeks you spent with him. You’d jump at the sight of your phone lighting up in the hope that he’d sent you a message, hell, you’d jump on him if you saw him after just a few hours. Now? Not so much. You might even go so far as to avoiding those texts, and certainly not getting yourself into public displays of affection. When you’re in a relationship, your partner should excite you and you should be happy, not all day every day (we’re not expecting miracles) but every day, and if you don’t, well, that says it all.

You Can’t Be Yourself

Put yourself in this situation. When you met your guy, you were a social butterfly but he thought that so many mid-week antics were “unnecessary” and “immature” so slowly but surely, you started saying no to the girls, as much as you wanted to, because you knew he disapproved. NO. STOP. RIGHT THERE. He came into YOUR life and if he doesn’t like it, frankly, he can lump it. NEVER let anyone hold you back from doing things that you want to do and more importantly, never let anyone stop from being you.

You Fight All the Time

Couples argue, that’s a fact. It’s perfectly normal (and healthy) to be a little competitive and confrontational at times because a bit of passion and fire in your belly shows that you care, which is good. However, if the arguments are constant about anything and everything, take a step and ask yourself objectively – is this normal? Chances are, the answer is no. Unnecessary drama is exhausting and a hostile relationship isn’t one you want to be a part of, trust me.

You Can’t See A Future

There’s always a certain stage in a relationship where you find yourself pondering what life will be like with this person in 5 years, 10 years, 20 years, and it’s perfectly normal to do so. You envision the natural progression between you and fit the pieces of the puzzle together, but with this guy, there’s no light in this tunnel, it’s all dark. You just can’t see because of X,Y or Z how a future with this person might pan out. If your insecurities about what’s to come can’t be fixed and you just can’t see a future with them, then maybe it’s time to walk away.

Wrong relationships can be extremely toxic and it saddens me that a lot of people are in them. Breaking up with someone is never easy, whether you want to or not. Sometimes, it just takes a penny to drop for them to realise their worth or maybe they just haven’t put their insecurities aside and plucked up the courage to admit that they might have made a little mistake with this one.

Sure, I know mistakes can break us but at the end of the day, that’s what makes us.