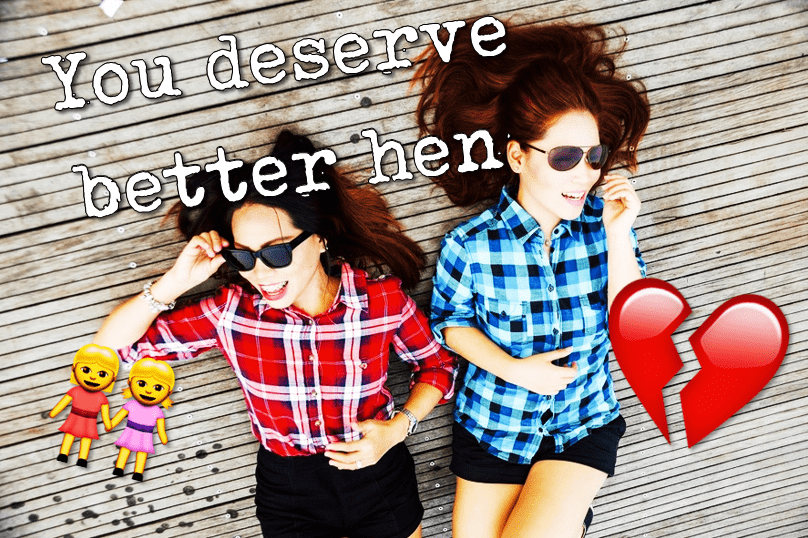 Break-ups are never easy and it certainly doesn’t take a rocket scientist to work that out. There’s a whole lot of emotions whirring about the place and no one REALLY knows what to do in these situations. I mean, when it’s you going through the break-up, you kind of know what works for you. For instance, one might have a few days of self-loathing on a couch eating nothing but ice cream and/or Terry’s chocolate oranges in bulk, but hey, that’s just me. The main thing is I (sort of) know how to deal with my feelings, but when it’s someone else, we humans are an absolute pain in the arse. As much as we try to help our friends or offer some friendly, caring advice, we always manage to mess it up and create a socially awkward situation at a difficult time.

So, if you’ve got a friend that’s going through a break-up, maybe consider NOT saying any of these things to her (or him) at any point. Ever.

Of course he hasn’t called, and if he has, it wasn’t the kind of phone call you’re excited to get. Avoid any chat about whether they’ve communicated, it’ll only tug at the heartstrings. Talk about the weather or Brexit or something. Anything other than “he who shall not be named”.

“You’re prettier than that new girl”

Erm excuse me, whether you’ve seen her ex has a new girl on Insta or not, this does not give you the right to breathe a word about another woman. Your pal wants to know nothing about this girl, even if your friend is a natural 8 and her ex’s new squeeze is a strong 5 with a good filter.

“Will you be friends?”

C’mon, they’ve just broken up and everything is floating around in relationship purgatory. The last thing she’s wanting to consider is being friends with a man she used to hold dear to heart, and naked body for that matter. Leave the friend zone chat for a good couple o’ months… at least.

“But I thought you guys were gonna get married?”

Maybe they were, but now they’re not, so button it. Things change, people change, and rather than sharing something stupid and potentially hurtful, maybe think about saying something like “pal your eyebrows are lookin’ good today”.

“You’re better off without him!”

I mean, 1) state the obvious and 2) she’ll have to be. If she wants to talk about how she is now a strong, independent woman who don’t need no man then so be it, indulge, but if she doesn’t, don’t take the reins. Just keep filling her glass with the good stuff and get some Blair and Serena on the go.

I imagine that with having her heart broken and her relationship status changing, Facebook wasn’t at the top of her priority list. Sure, we’re all social media obsessed these days (and don’t deny it) but deleting someone from your friends list is a real closure milestone, so she’ll do it when she’s ready. Leave her to it.

Oh c’mon, the grass is always greener? Really? Cut your friend a little slack, they weren’t single 5 minutes ago so they need time to adjust to, well let’s call it a “lifestyle change”. They’ll soon find out that spending more time on themselves (rather than on a relationship that’s not working), they’ll be pretty happy anyway.

“I understand what you’re going through”

No matter whether you’ve experienced  a million break-ups, or near to that, every single situation is completely unique to the two people involved. I hate to tell you this but as much as you think you might understand EXACTLY what your pal is going through, you don’t, and chances are you never will. So instead of trying to understand, just listen to what she’s got to say, nod along and perhaps open up some Pringles to share.

“Oh haven’t you still got his stuff?”

She knows damn well that she’s got drawers and wardrobes full of little and large reminders of their relationship and she certainly doesn’t need you bringing that to her attention once more. Why not just offer a generic “if you need a hand with anything, just say” which could mean you might help her take his crap back to his place or alternatively, burn it with fire. The option’s there I suppose.

“OMG do you think there’s someone else?”

Just don’t even go there.

“I never liked him anyway TBH”

As much as you may think this will make her feel better, does you really want her thinking that you’ve been lying to her all the time they were together about thinking he was a decent chap? No, of course not. When you’re friends, if they’re happy, you’re happy, ergo if they’re sad, you are too, and she’ll know that, so there’s no need to hatch a plan to end this man.

“Just get yourself on Tinder hen”

I don’t think I need to explain how crappy this idea is, and if I do, shame on you.

“He’ll come crawling back, you watch”

The last thing she wants to think about is her ex making a guest appearance at a bar in town, or at her front door for that matter, so even if you think he’ll try and snake his way back into her life, give her other things to think about, like nights out you’ve got to look forward to, shopping, spending money, drinking, dancing, laughing and the likes.

“You were SO out of his league!”

Let’s not state the obvious or try and find the silver lining in this black cloud. Rather than offering up a back-handed compliment which basically means “you’re a stunner but your ex was a dog”, just get dressed up and go for food and cocktails because, well, food and cocktails. Need I say more?

They don’t deserve better… They deserve the best.