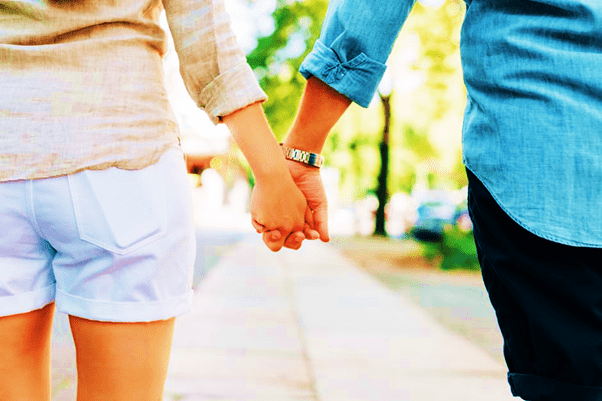 We women forever find ourselves sat amongst our friends and discussing our relationships, trying to carefully decipher mixed messages and deciding whether or not there’s something there that wasn’t there before. Ladies, let’s for once, be honest with ourselves. Of course, we would like to think that we’re compatible with every man on the planet because, well, we’re all queens, but at the end of the day, we’re not.

Some men will be into you, some men won’t, but that’s okay. I’m sure as hell you’ll feel the same about guys. You know when you meet someone whether you’re into them or not within the first 5 minutes and it’s the same with the blokes. There are no grey areas, as much as we think there are, it’s actually pretty black and white.

The majority of the time, all we women want is to know whether or not the feeling is mutual when we’re dating and when it comes to guys, there are definitely tell-tale signs that’s he’s totally into you, and here’s what they are…

Rather than getting the odd text message here and there, you’ll find yourself picking up the phone on countless occasions because he just wants to talk to you, ask you about your day or tell you a joke. An actual spoken conversation is definitely more significant than one that is riddled with blue ticks, don’t you agree?

He won’t run, hide or shy away from labelling your relationship, and no I don’t just mean your status on Facebook. He’s so into you that he’ll probably be relieved, overwhelmed and pretty damn happy when you agree to be his significant other.

He’ll invite you out with the guys

This won’t happen all the time because let’s face it, you need your time apart, but if a time arose, he’d happily invite you out with the guys to the pub or whatnot. He’s comfortable and happy enough with you to let you into the generally-forbidden-to-girlfriends territory, and that’s quite a step forward if you ask me.

He’ll check up on you

If you’re on a weekend away, or even going to an interview, if he’s into you, he’ll want to check in and see how you are. Why? Because he genuinely cares. How you feel is beginning to affect how he feels and he knows it. It might be a text, or a phone call, but whatever it is, know that he cares. That’s kind of a big deal.

He’ll be nice to your friends

If a guy’s really got a thing for you, he’ll go out of his way to make you happy and one of those ways is to impress the friends. I don’t necessarily mean by showing off, I mean by being polite, friendly, funny, and generally just getting to know them. Sure, he might be out of his comfort zone but understand that he’s making the effort… for you.

He’ll take you out

He might have the means to take you to luxury Michelin star restaurants on date night, or he may just take you to the burger place round the corner because he knows you like the sweet potato fries they do. Either way, he’ll take you out and treat you because you are his Queen, and that’s that.

He’ll invite you to events

Perhaps it’s a family affair or a friend’s birthday, it could be anything really, but if he’s really into you, he’ll most certainly want you to be his plus one and walk through the door with you on his arm. This is a pretty good sign that he likes you a lot and is ready to go from being single to being a couple.

He’ll not be afraid to emotional

Whether it’s complimenting you, talking about the future, telling you how he feels, if a guy is truly into you, he’s a wholly open book. It’s takes a lot of men A LOT to be emotionally “naked” if you will, so appreciate that he’s chosen to be this way with you because he trusts you and he really, REALLY likes you.

He’ll never be afraid to look and you and tell you you’re beautiful. I’m talking real, sincere compliments here, none of this “you’re fit as, I’d bang you” malarky that seems to constitute as complimentary on Tinder, for instance. If he really likes you, he’ll go out of his way to compliment you with the reasons as to why.

As an almost significant other, he trusts your judgement. That could be about work, friendships, relationships, anything really, but if you’ve got something to say about it, he won’t simply discard your suggestion like a used tissue. He’ll take it on board and in most cases, act on it, because if you feel the same way he does, you’ve got his best interests at heart.

He’s buying clothes and he wants you to go with him which is a pain because you weren’t planning on getting dressed today, and everything he seems to take a shine to, he asks “do you think this is nice?” or “what do you think?” At first, you think, why are you asking me? These will be your clothes! In reality, he’s asking your opinion because he actually values what you’ve got to say and what you think.

He’ll make time for you

If a guy’s not into you, he’ll come up with excuses, he’ll always have something on the back burner and potentially cancel plans last minute. If a guy’s really into you, chances are he’ll act in the complete opposite fashion. He will ALWAYS make time for you, even if it’s hard to pencil in that time between work and other commitments, he’ll make it happen by hook or by crook.

It’s always a big step in any relationship but if he’s into you, he won’t think anything of it. Not in a bad way, of course, but he likes you so he’s already made peace with the fact that it would happen sooner or later. He’ll make a real effort when he meets the parents (and the rest of the rabble) because he wants to be a part of your life. What a guy.

He’ll talk about the future

This conversation will generally be avoided by men who aren’t feeling your connection, for instance, but believe it or not, most men wear their hearts on their sleeves if they’re smitten and with hope and agenda, he’ll be more than happy to tell you that it’s you he wants for the forseeable and well, if the feeling’s mutual, that’s pretty fantastic if you ask me.