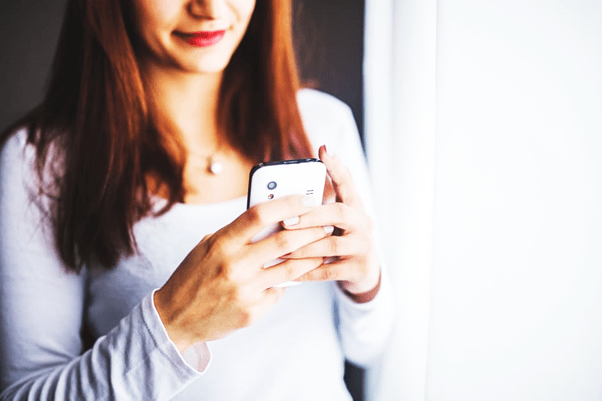 It was a Tuesday night and although I was in work the next morning, I wanted a cocktail. Can you blame a girl? No, no you can’t. I thought it to be best practice to summon my friends together for an almost-mid-week beverage or two in the town to drink our troubles away, within reason of course. 4 of us came together after work and as soon as we did, the drinks were bought, our bums were parked and we were ready to let it all out – ‘all’ being work worries, current relationship issues, what shoes we’d wear for a Christmas outing, etc etc etc.

One of my friends had recently got into a new relationship, which was nice. She’d been single a while and ‘playing the field’ (for want of a better phrase) but she seemed to have found a guy that she was content with enough to commit to, and if that made her happy, then that made me happy too. However, this evening, she wasn’t glowing when talking about him, in fact, quite the opposite. Short, sharp yes and no answers told me that something was amiss and naturally, as the nosey parker that I am, I couldn’t just let it lie.

“What’s up? What’s going on with you and your man?”

Poignantly put I thought. She was actually going to see him that very evening after a cocktail or two with us so whatever it was, she needed to nip it in the bud before causing an almighty confrontation on her arrival later on that night.

“Oh nothing, I just saw a picture of him and his ex before and now I can’t turn my brain off”

Typical. Bloody typical. We just can’t resist can we? Why is it that when we women find someone wonderful, our beautifully psychotic minds lead us to find all manner of reasons to f*ck it up somehow. If you’re a female sitting there reading this thinking I don’t do that, hold that thought, because you do and you know you do. For some bizarre reason, we want to know absolutely everything about our significant others which I guess on the one hand is fine, but some things are better left unsaid and unheard for one reason or another because – let’s face it – the past is the past, so unless it’s something of monumental importance, trivial matters are best left back where they belong.

Regardless of this though, we still do it. We still whip out our FBI badges and find out as much as we can in a way that avoids us asking questions outright. The crazy thing is, we don’t really care about where he worked in 2011, or what school he went to, we want to know about the ghosts of girlfriends past. As I took a rather hearty sip of my Mojito before placing the glass down to carry on the conversation, I couldn’t help but wonder…

Why do we always want to open the ex files?

We all do. We all want to know about the ex and what they were like and how they got together and why it ended and blah blah blah and yes, before you say anything, I understand that some minor details are noteworthy, for instance, if said man has children with said ex, or *God forbid* if there was violence in the previous relationship, but generally speaking, there’s nothing to tell. Two people got together, two people had fun for a while, two people fell out, two people realised it wasn’t right, two people go separate ways. The End. It’s just never as black and white in our minds though is it?

“Why do you care so much about a picture of him and his ex?”

Another poignant outburst from The Narrative I thought. I mean, what does a picture really matter? If they ended amicably (or even if not), it probably just didn’t occur to him to troll through his own social media and remove any and all evidence of her existence. A lot of men don’t think like this in the way women do, hence why we could/should be more understanding of things like this.

“Because! I didn’t know they were still together a couple of months ago, I thought he’d been single longer, and she’s well skinnier than me! Oh shit, it’s 7 , I’ve gotta go, Nay I’ll text you”

And to think she’d leave when I had so much to say! Well, at least I had another hour or so with the girls (and the Mojitos) at least to mull over how she was feeling but more importantly, why. Why did it matter that he had a girlfriend a couple of months ago? Did he lie to her? No, surely not. Had she wanted him to have been single longer? Did she feel troubled by the fact that she might just be another notch on his bedpost rather than his happy ending? Did she realise that letting an ex affect her self-esteem was pretty crazy, but kinda sad too? Probably not. I thought I’d better text her. Whether the reason as to why she felt so crappy was justified, I was her friend and a friend in need is a friend who needs a message saying “Are you okay?” About 15 minutes (and another cocktail later), my phone lit up on the table… 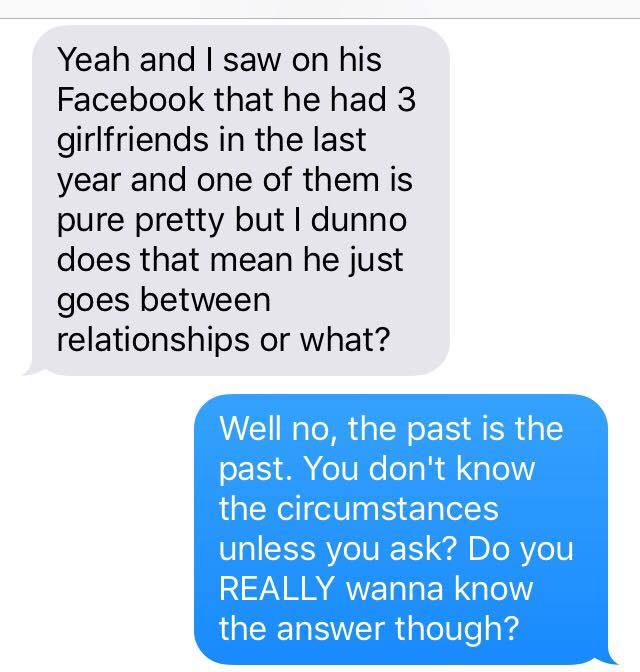 Well. I wasn’t expecting that. She’d clearly spent the last 15 minutes on the train to see him, not simply playing Candy Crush or flicking through mindless Instagram posts, no, there was method to her madness. She’d meticulously trawled through his Facebook page to find out information that I’m not entirely convinced she wanted to know. She’d opened the ex files, and now, there was no going back. So he’d had 3 girlfriends in the last year, this could be for all manner of reasons, none of which she knew but I felt it was vital to ask if she REALLY wanted to know the answers if she were to ask him.

We think we do, but don’t deep down. It’s like I said, unless something significant had occurred, the more you know, the worse it is. Suddenly, you find yourself comparing your current relationship to those of the past and when there’s different people involved, that simply can’t be done. However, this whole ‘ex’ thing was clearly bothering my dear friend so rather than heading for a further social media stalk…

Would it be wise for her to confront him so that each of them can lay their ex cards on the table? 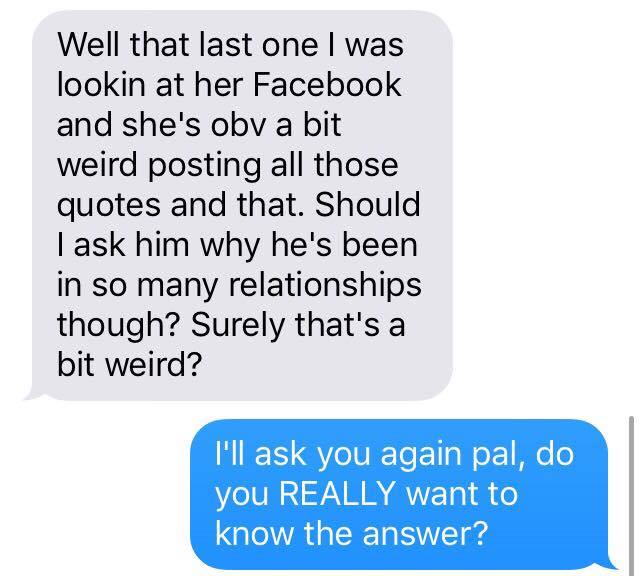 So now she thinks the ex is weird and I imagine a whole plethora of things are going through her mind. She’s not the only guilty girl in this situation though. There are so many girls obsessed with the ex and it all boils down to self-esteem. Are they prettier? Are they smarter? Are they skinner? Are they richer? My advice? Who gives a f*ck. An ex is an ex for a reason. You now have a partner who is with you because, well, they chose you. In fact, if they’ve had multiple partners in the past, is it not a bit of a compliment that they’ve been with more people than you anticipated yet you’ve ended up being the cream of the crop?

Now’s the time to make the decision though, does she ask him and clear the air? Bear in mind that he hasn’t told her he’s been in 3 relationships in the past year, she found that out using her Facebook detective skills so this probably won’t paint her in the best light. Or does she simply forget about the past (and the exes in general) and look to the future?

Is it worth opening the ex files to taint what might be a fairy tale?