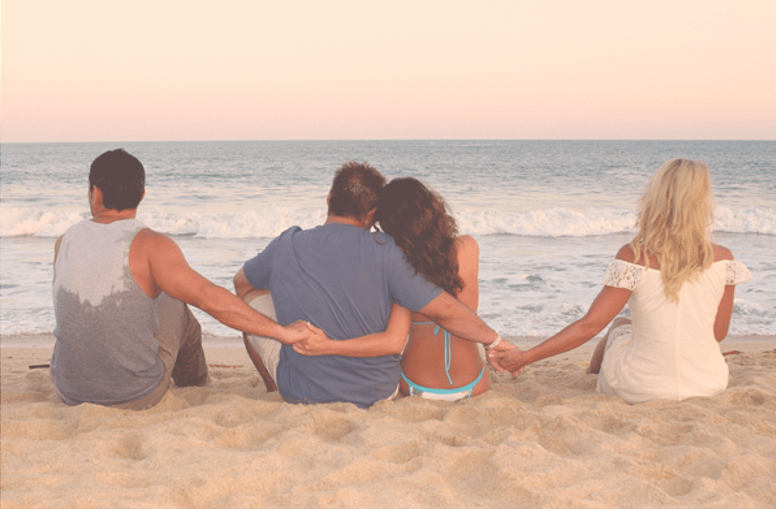 Let’s be economical with the truth here, traditional dating has pretty much disappeared. It’s 2017 and it’s almost a rarity to meet someone in a social setting and date from therein. No, it’s 2017 and it’s the age of swiping right and dating multiple people, as the vast majority of the population can’t seem to contend with the notion of committing to just one person at one time. Oh and I’m not simply assuming this – the facts are out there – the number of people getting married is decreasing by the day, yet the number of people remaining to be single or in non-committal relationships is on the rise.

It seems that – as an alternative to a monogamous relationship – a lot of couples are opting to be in an open relationship for more reasons than one and with this in mind, I couldn’t help but wonder…

What exactly is an open relationship?

Well, the actual definition is “a marriage or relationship in which both partners agree that each may have sexual relations with others” but there’s much more to it than that. In my opinion, it’s not black and white, in fact, it’s about as grey as it gets, and I’m not just referring to Christian here. Relationships are confusing enough as it is without adding sex with other people into the mix. Open relationships are pretty normal these days (or so it would seem) and I had to do my research because,well, I wasn’t really taking the bait.

After having looked into it a little more, it seems to be the case that every couple in an open relationship adhere to different rules that suit them. Quite rightly so I guess, I mean, if you’re going to be involving other people, then there certainly needs to be some sort of agreement to ensure that no one crosses the line. Generally speaking, it seems that non-monogamous couples set rules that any action outside of the relationship must be ethical, consensual and above all, safe.

I wanted to know what kind of rules these might be and I stumbled across an article written by Valerie Fischel, who herself is in an open relationship with her partner. I read through their rules – thoroughly – and I have to admit, I get it, but I’m not entirely sure I agree. Of course, I’m open minded enough to understand that we’re all different but perhaps I’m too much of an advocate of monogamy to comprehend such things. Anyway, here are 3 of her rules, and my thoughts too.

This was the first rule we made up: This is our primary relationship. We make a point not to spend too much time with secondary partners. We can, and sometimes do become friends with them, especially if they hang around for a couple years, but we have to cut it off if it becomes more than that.

Okay, well that’s all well and good but if this is your primary relationship, surely you should be spending all your energy in making that one work in every way you can? Might your own sex life become stale because you’re more interested in pursuing the forbidden fruits outside of your relationship? Sure, I mean you can control how many times you sleep with someone but you’ll never be able to physically control your feelings. It doesn’t matter whether you spend a little or a lot of time with another, you might fall for them instantly and then what? I’m just playing Devil’s advocate here but you get where I’m coming from right?

Honesty. Always. But that’s something we’ve never really had to make an effort for.

But is total honesty really the best policy in an open relationship? Surely, if your seemingly significant other came home gushing about the best sex of their life with another person, your self-esteem would take a battering and you’d be left feeling hurt? Granted, I understand that if they’re honest about where they are and who they’re with, it keeps your mind at ease but at what point do you withhold information to spare your partner’s feelings? I know you’re both down with the whole open relationship thing but no one ever wants to know too much about their partner being with another person surely?

Once, I saw a Facebook profile of someone he ended up sleeping with, and she was absolutely stunning. That was hard for me because I couldn’t help but compare myself to how I perceived her online (most of which was just illusions filled in by my very own brain, of course). But we got through it together. Just because he was the cause of my hurt, it didn’t mean I couldn’t wait to run into his arms and have him comfort me.

I mean, come on! We women overthink enough as it is, to the point where if overthinking burned calories, we’d all be dead. It’s bad enough imagining that your partner would even consider going near someone we consider to be aesthetically perfect, but actually knowing that they’ve done it? Of course it’s hard and your self-esteem would obviously take a big knock, but how often would this happen? Natural insecurities are bad enough in relationships without the actual knowledge of them coming true being exacerbated.

I’m going to be brutally honest now. I totally understand that we’re all different with different needs, but I just don’t get it. I just struggle to comprehend how you could love someone more than anything – then sleep with someone else, sharing an emotionally intimate, physical connection – then hop back into bed with the love of your life that very same night. I feel guilty just thinking about it! Surely I’m not the only one?

It seems that a lot of people in open relationships believe monogamy to be unnatural but what they really mean is, it’s unnatural for them. I suppose in a way monogamy is like Marmite and that’s the way we should look at it. Some people love it, some people hate it. Perhaps it’s not that those who choose open relationships are afraid of commitment, maybe they just don’t want it. It makes you wonder why though right?

I mean, sure, we’ve got to break traditions at some point but why now? Why are open relationships becoming more predominant by the day? Maybe our generation has been spoiled: spoiled in the respect that an traditional ideas of monogamy are now tarnished by horror stories of divorce, infidelity and betrayal which are now rife and accessible through media, and spoiled in the respect that millenials have so much choice and so little time to commit. My question to you is, what do you think…

Open Relationships: Yes or No?