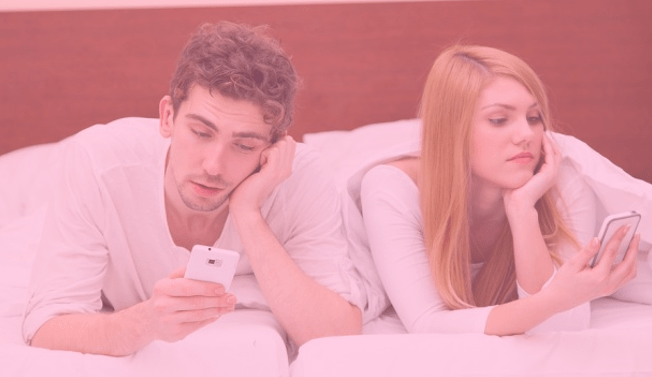 Technology has a lot to answer for when it comes to modern day relationships. Not only do we bicker about what’s on the box, we’re also glued to our phones 24/7. Whether that be for a bit of a nosey on Facebook, or playing mindless games, or eBay shopping, or WhatsApping friends, or taking photos of what we had for dinner and uploading it to Instagram, we all find a reason not to leave our phones alone for 5 seconds and it’s pretty disheartening.

A lot of people seem to get more enjoyment from interacting with inanimate objects than their partners, and this is increasingly worrying. In fact, it’s so popular that it’s now commonly being referred to as…

…sounds like some sort of sexually deviant act right? Nope, it’s a simple hybrid of “phone” and “snubbing” – basically meaning that you’re paying more attention to your phone than to, well, the world around you, and in particular, your S/O.

In fact, that’s probably the polite way of putting it. It’s an absolute pain in the arse. You’re asking a question and can’t get an answer out of your bloke because he’s staring at SnapChat or something, so you get frustrated, and angry, and annoyed, and upset. Quite rightly so too! Even Ira Israel, a psychotherapist, says that choosing your phone over your partner is “emotional infidelity” and I’m inclined to agree. It makes you feel rubbish when you’re second best and I guarantee we’ve all been there too – it’s SO annoying.

You and your man are out for your first “date night” in months where you just kind of leave real life behind and want to enjoy each other’s company and have a laugh (and a wine as well) but when you find yourselves seated in the restaurant, he won’t stop scrolling on his phone while you’re trying to talk to him. It totally ruins the atmos, the vibe and let’s face it, the whole tone of the evening. You automatically feel like a third wheel or less of a priority – in short – neglected.

The problem is, we’re forgetting about real life because we’re all so focused on what’s going on behind screens and it’s affecting everything. In the evening, all I want is an hour where I can light a candle, close my perfect fit blinds, and my partner and I can just lounge on the couch together having a bit of a laugh about something that happened during the day and hey, I wouldn’t say no to a bit of hands-down-pants action either – but alas – to even get your SO’s attention when they’re engrossed within their Twitter feed is a challenge in itself! Should it be this hard?

Unfortunately, in this day and age, it is. Phubbing is an everyday occurrence within modern relationships because we’ve all become a nation of screen junkies. If you’re not shouting at your fella for always being on his phone, chances are, he’s probably shouting at you. It’s a vicious circle.

By constantly choosing time with your phone over time with your partner, you’re physically showing them that technology is more of a priority than they are. Not good. Even worse though is that the more this happens, the more likely they are to admit defeat and have their needs satisfied elsewhere. I don’t mean they’re going to cheat on you, but you’ll certainly see a change in their behaviour and it could even turn into a make or break situation.

There’s nothing worse than being in a stale relationship, but if you can pinpoint the exact reason why but no one makes an effort to change that, then you’ve got a real problem on your hands.

So, rather than thinking of the problem – being the phone – what’s the solution? In this digitally distracted world, we need to come right back down to reality with a bang. My plan – ditch the phones and the tablets. I don’t just mean chuck ‘um in the bin, let’s be realistic here, but what’s the harm of getting rid of your phones each night?

When you come in from work, unless you’re expecting a monumentally important phone call, put the phone in the bedroom – away from you – as the old saying goes, out of sight, out of mind. Make a conscious effort to actually talk to your partner – no texting, no WhatsApping – actually talking. They’ve got to do it too! If you don’t make time to prioritise one another, the inevitable will happen – being that you’ll slowly drift apart.

Rather than you or your significant other using your phone’s as an escape – here’s a thought – use each other. Have a chat, play a game, plan a holiday, have mind-blowing sex, get traditional and trust me, that little bit of extra quality time breathes the air back into a relationship, necessary to keep it healthy and more importantly, alive.

So rather than keeping “phubbing” alive, perhaps it’s time to start a new trend of no phones, no moans and more attention to the erogenous zones.