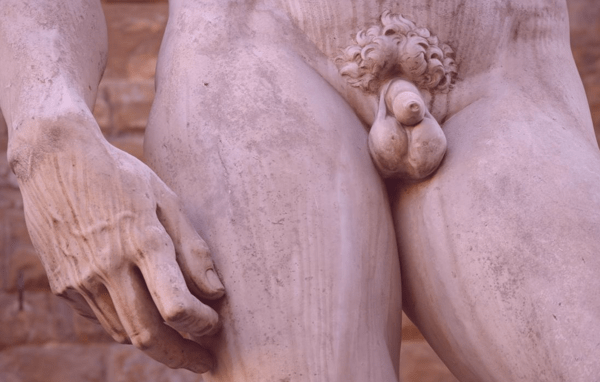 Relationships are full of anxieties, there’s no denying it.

Whether it’s casual liaisons, long-term or even marriage, we still manage to worry and overthink things and situations which really – in the grand scheme of things – aren’t that big a deal. Between the pasts of our partners right up to what might make our significant other’s more attracted to us, we definitely can’t switch off.

Oh and it’s not just us ladies, it’s the men too! I suppose you can guess what they’re biggest concern might be? Yep. The size of their manhood.

No matter whether it’s big, small, thick, thin, whatever – conventional wisdom suggests that this is generally a man’s biggest worry – especially at the beginning of a new relationship, but get this. Apparently, men’s willies are getting bigger.

Results of a recent survey conducted by well-known condom brand SKYN, has revealed that the average penis size has grown by an inch to 6.1 inches when fully erect. Oo er.

Now I know what you’re thinking, hang about a minute, how do they know this, what EXACTLY did their research entail? Well they certainly didn’t whip their tape measure out and get 100 men to drop their draws. No, they simply asked men what size their willies were when they were, you know, ready for action.

So let’s be economical with the truth here, for the average penis to have increased by a whole inch in just a year is a HUGE evolutionary step, so in this case, might it be safe to assume that some men MAY have just exaggerated slightly? Another report in December showed that men almost always lie about how big IT is but on some level, can you blame them? I mean, where men’s egos and masculinity are involved (which is pretty much all the time), SURELY if they felt that the size of their hoo-ha was a little below average, they wouldn’t want to tell the world about it?

Why are men so hung up on penis size in the first place?

Sex can be great no matter how well-endowed a man might be and in fact, did you know that famous sex researchers Masters and Johnson have concluded that size of the male penis can have no true physiological effect on female sexual satisfaction.

Oh and let’s not forget the “lad chat” too.

Naturally, the men’s changing rooms after a weekend match of football sees men all over the country exchanging banter in the showers and I’ve no doubt that a few may be mocked due to their appendage, simply because – well – it’s a “lad” thing to do. Men have a funny old way of breeding insecurities in one another so maybe the mates are to blame too? Who knows.

The main thing to remember is that no matter what the men have got down there, the sex can be good no matter what. It’s as the old saying goes, it’s not what you’ve got, it’s what you do with it that counts – am I right ladies? Yes, the answer is yes.